Grand Competition at the 3iCampus BEACONING

Grand Competition at the 3iCampus BEACONING launched by ORT Innovation FRANCE  for the Centers and for More than 600 students and teachers during the Educatec and Startup For Kids Trade Shows organized from 21 to 26 November 2018 in Paris!

We are currently facing the challenge of digital transformation of our educational ecosystem. In this context, ORT Innovation France invites you to participate in the Grand Contest of 3iCampus BEACONING.

Beaconing will already be used by more than 600 students and teachers during the Start’up For Kids Workshops and Educatec in Paris: “The Backstage of the Video Games: you will be successively in the shoes of a PLAYER and in the role of CREATOR of BEACONING! ”

The Workshop: The Backstage of the Video Games: you will successively be in the shoes of a PLAYER and in the role of the CREATOR of BEACONING!

But what is the game?

You enter the world of SERIOUS GAMES, a great innovation to make learning in school more fun, more attractive to take into account the skills of the 21st century, ie the 4C. Thus, beyond the school knowledge, you can exercise your critical sense, you will have the right and even you will be encouraged to COLLABORATE, COMMUNICATE in TEAM and you let guide by your CREATIVITY. Gamification and geolocation are at the service of education!

So, do not hesitate to go to the door of BEACONING as they have already done more than 600 years in France, but also young European BEACONING was developed by a team of 15 European partners, researchers in science and technology. Education, Start-Up Companies or EdTech Video Game Companies. 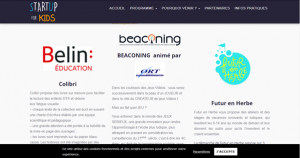 The advantages of BEACONING:

Why 3i CAMPUS Beaconing?

INSPIRE, INNOVATE and INTEGRATE:• INSPIRE: The new trends are to use gamification in pedagogy to promote actions for “Learning to Learn with pleasure”.• INNOVATE: Beaconing is the result of a European H2020 project, creating Serious Games. The Geolocalised Quests improve learning methods and offer the opportunity to integrate 21st century skills into the classroom.• INTEGRATE: ORT Innovation is getting closer to the Ministry Actors by participating in Lab110Bis, the Lab of Pedagogical Innovation of the Ministry of National Education to experiment, exchange, learn and quickly test solutions that meet the challenges of education. today and tomorrow. He works in relation with CANOPE Networks, DANE … For more information and to participate in the COMPETITION, do not hesitate to contact Anne-Elisabeth LENEL

Videos on  Usual Feed back on Beaconing in Action : http://edlab.paris.ort.asso.fr/beaconing/