On February 10th a game-based cross European event took place in 15 European cities and one from Asia in the same time. In Targoviste, players were happy participate and be engaged in a treasure hunt game which gave them the opportunity to learn about the environmental issues. The players, were informed about the event through flyers distributed in their schools.

Clues were placed in different spots in Targoviste and this allowed players to explore their city in a different way and find in the same time information about the history of the city and test their knowledge regarding environmental issues. 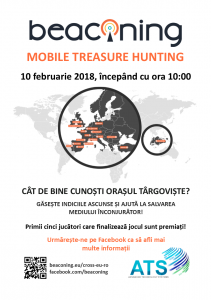