Or, what can teachers expect from Game Learning Analytics in the context of the BEACONING project?

Tania is a teacher who has agreed to participate in BEACONING pilots. She is not particularly tech-savvy, but is not afraid to learn, and already uses computers to prepare her lesson plans and do research online. She is also an avid smartphone user, with multiple day-to-day applications installed to plan vacations, drive to unknown places, or exchange instant messages. Still, Tania is reluctant to use the educational games in her class because she is afraid of losing control of what is going on, of not knowing what is happening once her students are “behind their screens”. They all seem to really “get” computers!

However, this will not be the case! Bea the BEACONING researcher helps Tania set the experimental lesson up. Tania provides a list of student names, and Bea adds them to the system, assigning a random, unique, and memorable identifier to each (only Tania will later be able to trace what identifier corresponds to what student, thus avoiding any privacy concerns, and allowing Bea’s group to freely to use for research the now-pseudonymous aggregated data that the system collects).

Tania explains to her students how the game is played, and the goal of using the game. In this case, she really wants her students to understand a particular spatial visualization problem (how to rearrange the contents of a given box), and to have them try out different approaches. This will be perfect not only to learn by applying the knowledge in actual situations and learn from their outcomes but also a perfect situation for a latter in-class discussion about the strategies or problems found.

Once the students begin to play, Tania has access to a console where she can see what her students are doing in the game. She is presented with different dashboards with easy to understand information about what is happening in the class and how well the students are actually doing while playing the game. She also has some alerts pop up when the system detects situations she can react to. For instance, Stuart, one of her students, is stuck in the first game scenario. Tania sees that he has not tried to use the “rotate object” option, and goes over to his computer to point it out for him. Returning to the dashboards, Tania sees that Susan, another of her students, has not interacted with the game for the last two minutes. This turns out to be because she is helping out her neighbor. 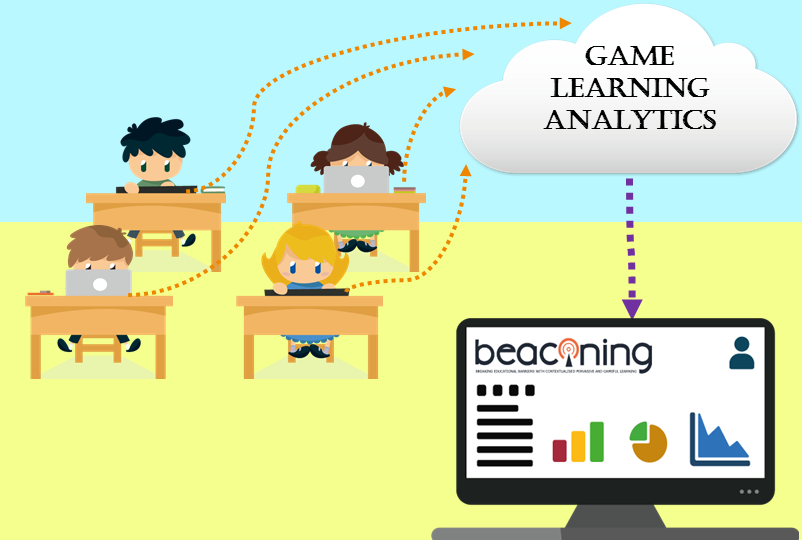 Now Tania is more relaxed. Not only the game is helping her students to better understand the topic at hand, but she feels empowered by the BEACONING system. She is not only keeping control of student progress – she is making a better use of her teaching time helping those students who are actually struggling. She has even time to take notes for tomorrow’s follow-up lesson, where the class will discuss the most common insights, strategies, and mistakes. She was also able to identify the overachieving students that finished the game early and suggested a few “extra credit” playthroughs to keep them active and interested in the task until the end of class.

If she misses anything today, tomorrow before class she can log back into the system and have another look at the dashboards – and even customize them a bit, possibly with Bea’s help. Bea can also access all the anonymized information about what happened in the class and how the students actually used the game. With this aggregated information from Tania’s class and others, Bea can analyze many different characteristics of the game such as what is the average time students take to finish the game, if the difficulty level was adequate, etc. All that information can be used to check if the game is working as expected, to improve the game if necessary or even to research about how do we learn with games.

Is all of that feasible? Yes, it is! At BEACONING, we are working closely together with researchers, educators, game developers, and practitioners to make it happen. We plan to build on results from other research projects (e.g. H2020 RAGE), to extend them to new scenarios and integrate all of this with the consortium’s know-how to make it feasible. The idea is that this should be applicable to a wide variety of games, and even to some games that were not initially produced in BEACONING. This does, however, require games to keep the analytics system in the loop, by sending a constant stream of relevant gameplay information for each student. While learning analytics can do the rest, there is no magic involved.

Does this sound interesting? We are up to the challenge! Please, keep in touch and join us on this wonderful journey to better understand how to use educational games more efficiently!